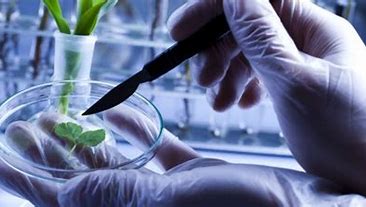 Soon enough, the CBD you consume may be produced in a laboratory instead of a farm. At least, that’s what some researchers are now working towards. As the popularity of cannabinoid products continues to explode, clinical researchers and for-profit startups alike are starting to explore the future of cannabis production. And increasingly, it seems like the future of cannabinoid products may involve more lab coats and cutting-edge technology than old-fashioned dirt and sunlight.

Whether this is a good direction or not remains to be seen. For the time being, we can investigate the fascinating potential of this technology, as well as appreciate the simplicity of the more natural approach used today.

In the area of lab-grown meat, DNA editing and other massive technological advancements, it’s no surprise that firms are starting to explore the potential for “lab-grown” cannabinoids. Research institutes and colleges are also exploring the new frontier of high-tech cannabinoid production.

Researchers at the University of California Berkeley recently synthesized both THC and CBD in a lab setting, using engineered brewer’s yeast and sugar. Fascinatingly, this research also produced several novel cannabinoids that are not found in naturally grown cannabis.

The process that most research has focused on is called synthetic biology. Essentially, researchers engineered common yeasts to produce chemical precursors to CBD and THC. The precursors were then processed to produce THC and CBD molecules that were identical to naturally-produced cannabinoids.

While most synthetic biology research is done in an educational setting, several biomedical startups are also exploring the potential for lab-grown cannabinoids. Investment firms have taken interest, noting that synthetically produced cannabinoids could potentially be more consistent, and more cost-effective to produce. It’s possible that lab-grown cannabinoids could also have a better environmental impact compared to industrial farming, which has a relatively high carbon footprint.

Of course, much of this research is in the very early stages. It’s unclear whether the techniques used are scalable, and whether or not these engineered cannabinoids will produce the same effects as naturally grown cannabis products.

The shift from natural growing of cannabinoids to synthetic biology technology offers huge potential. If successfully implemented, firms will be able to produce cannabinoids inexpensively, consistently, and in an environmentally friendly fashion.

Synthetic production eliminates many of the variables that make the cannabis growing industry so fickle – including weather/climate impacts, inconsistent yields/potenticies, and the complicated patchwork of legal regulations that farmers must navigate.

Of course, this technology also poses significant risks to the industry, and to consumers. One major concern is that bioengineered cannabinoids will be patented and monopolized by powerful biomedical firms. This would hurt both CBD/cannabis industry, as well as consumers.

Some individuals are also concerned that we may be straying too far from nature. The cannabis plant in its natural form presents us with a huge variety of gifts. In picking apart its elements, synthesizing and genetically modifying where we see fit, we are perhaps abusing this natural gift.

For now, NuLife CBD aims to keep things natural and holistic. While we can appreciate the technological advancements, we firmly believe in the wisdom of the natural world.

What do you think about lab-grown cannabinoids? We’d love to hear from you!